The Hants & Isle of Wight Branch of the MTSFC held their 1st fishing event of the year on the 6th May at Meon Springs Trout Fishery, which is nestled in a beautiful part of the Meon Valley.

The event was held for 18 children from 3 schools within the Province. We were also honoured to be joined by the Pro Grand Master, Peter Lowndes along with a film crew who were making a 4-part television series: “Inside Masonry”, which will be aired on Sky 1 later in the year. Also in attendance was the Provincial Grand Master, Mike Wilkes. 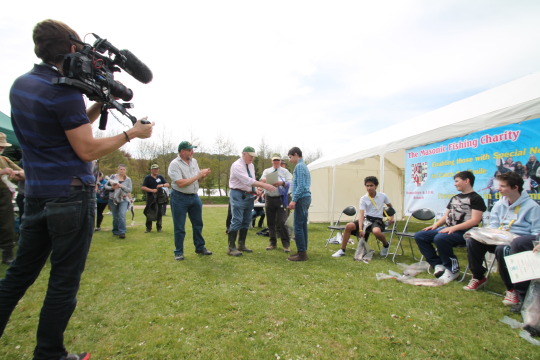 Our MTSFC motto is to ‘catch the smile’, and this was certainly the case at this event.  The sun shone down on us all day whilst the children learnt a new skill courtesy of our dedicated casters.  Every child caught at least one well-deserved trout, which was then cleaned and given to them ready to cook, along with a recipe card.  The smiles on the children’s faces made the day a complete success.
After spending a fantastic morning fishing, the children, teachers, carers and volunteers enjoyed a wonderful BBQ lunch, expertly cooked by Bob and Albi, and served by our super catering team. Once refuelled, it was back to the lake for another fishing session before the award ceremony. Each of the children were presented with a medal and certificate, for their incredible achievements, by the Pro Grand Master, Peter Lowndes (wearing a pink shirt) and Bro Jerry Board ( beard, casual clothing with MTSFC cap on), who arranged the necessary fund raising events to support this fun and interactive fishing outing. 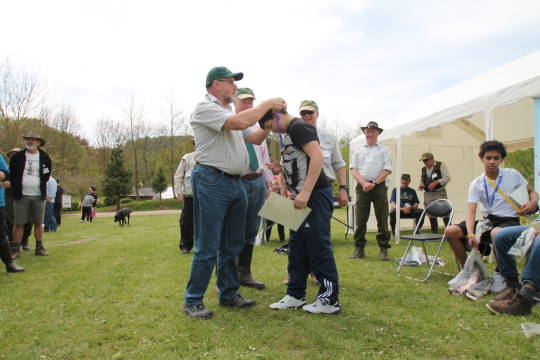 After receiving his medal, one child stood up to express thanks to the casters and other volunteers on behalf of himself and his school.  Both his teachers and all of us present were bursting with pride to be thanked in such a moving way.
Following farewells to the participants, Peter Lowndes congratulated the team on a very successful event.  He also thanked them for their continued hard work and commitment to fishing in the face of adversity and enabling children to ‘catch the smile’, which certainly was the case on this occasion.

Jim Steele (wearing the MTSFC's uniform and sunglasses), Branch Chairman and Event Organiser, expressed his thanks to all the casters and volunteers, without whom the event would not have been possible.