ANOTHER GREAT EVENT FOR THE DEVONSHIRE BRANCH!

Despite the wet and the cold, the children attended  a coarse fishing event organised by the Devon Branch of the Masonic Fishing Charity at the Town Parks Fishery near Paignton on Friday 22nd April 16. The event - sponsored by St Bartholomew Lodge No. 6378 - was,  a total success with every guest joyfully catching at least a couple of fish. 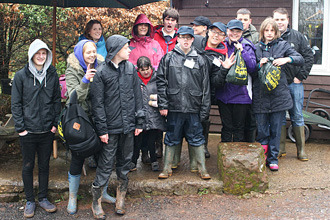 The event preparation followed a now familiar pattern of confirmatory risk assessment, safety briefing, venue and equipment preparation, followed by coffee, sandwiches and – despite the increasing rain – plenty of banter.

The weather however, displayed no signs of improving; and so the event organiser made an apprehensive call to the school to find out if the met report had put the children off.

The call was as it turned out unnecessary as the school affirmed their intention to attend and shortly afterwards the school party, which encourages its pupils, ‘to be the best that they can’ arrived and excitedly debussed. The children were then givena safety briefing and introduced to their caster/helper for the day before eagerly setting off for the bankside.

The rain showed no sign of lessening but the children, suitably attired in waterproofs and ardently refusing to let the weather dampen their spirits, embarked on their adventure.

The fishing was good as evidenced by the whoops of joy as the children caught small but frequent fish. Nevertheless, the promise of lunch provided an appropriate opportunity to escape

the weather and so the children – still unbowed by the damp Devon sky – decamped to the Totnes Masonic Hall for a hot lunch lovingly prepared by Jules Niles and Maureen Warne.

The lunch, consisting of hotdogs and hamburgers, was accompanied by a film show and concluded with a prize giving ceremony for all the participants.

This was an important part of day’s schedule, as the children enthusiastically applauded as each guest was presented a medal and a Certificate of Achievement by W Bro. Dave Lang, a key branch member representing St Bartholomew Lodge No. 6378.

This was another success for the Devon Branch of the Masonic Fishing Charity and wholly due to the branch stalwarts (Steve Hart, Dave Hodge, Graham Sawyer, Roy Fancett, Dave Lang, Mike Latham, Nigel Bird, Keith Rigby, Steve Newman, Chris & Kay Mason, George & Maureen Warne, Phill & Jules Niles) without whom the event would not have been possible.

The Devon Branch are looking forward to their next event (jointly sponsored by Ebrington Lodge No. 1847 and the Lodge of Industry No. 421) for autistic children at the Town Parks Fishery on 10 June 16. In addition the branch will be holding a fundraising fishing day at Blakewell’s Fishery near Barnstable on Sat 25 June. So if would like to be part of this very important Masonic initiative (or participate in the fund raiser) please contact the Devonshire branch chairman on 07900 220 390 – all are welcome.